New Year is the most celebrated holiday in Japan. It’s full of tradition, customs, and events. Schools are out for about two weeks total before and after New Year and most companies also close their business from around December 30th through January 3rd. This was how my family typically spent our new year’s holiday during my childhood in the 70’s in Japan.

A week before New Year’s Eve

Kuro-mame (黒豆 black soybean) is a dish cooked in soy sauce and sugar, and symbolizes a wish for health as “mame” also sounds like hard work and good health in Japanese.

We also have a crunchy dried anchovy dish called tazukuri  (田作り), which means “rice paddy maker.” This is because sardines were once used as fertilizers for rice fields, which are called rice paddies. Therefore, its symbolism is an abundant harvest.

Another dish is shrimp cooked in soy sauce and sake. Shrimp is a symbol of longevity because of its beard and curved back like an elderly person.

Most of these special dishes are prepared with a lot of soy sauce, sugar, or vinegar to preserve the food and enough is made to last over the New Year period. Years ago, most stores were closed over the year-end and beginning of the New Year, so people relied on food preservation. In turn, this also helped to reduce work in the kitchen.

Each household’s osechi ryori is slightly different. And now you can even buy osechi ryori already prepared at stores. But my mother always made everything from scratch, which requires a lot of planning. This time of year in Japan, all the stores are packed and everyone seems to be in a rush preparing for the big holiday. It’s much like the hurried rush here in the US just before Christmas.

This is when my father joins the New Year prep party. It’s time to clean the whole house! It’s believed that the New Year is a fresh start for everything, so we need to wash away any dirt from the passing year for the new year. This requires a very thorough cleaning of the whole house, known in Japan as Ōsoji (大掃除). I remember I was shivering and wrapped in a blanket while my parents opened up all doors and windows in the cold weather and wiped them by hand until they were literally shining. My sister’s added responsibility was to clean the bathroom besides her own room. Being a younger sister, all I had to do was to clean my room and to observe everyone’s hard work. I miss those care-free days!

By the evening of the 30th, the house is super clean and all the osechi ryori is packed, stored in a cold place, and we are ready for the fun to start the next day, New Year’s Eve!

The real fun on New Year’s Eve starts in the evening when the popular annual music TV show is on, called Kōhaku Uta Gassen (紅白歌合戦). You get to see performances of about 50 musical artists who were the most popular that year. The show runs for more than 4 hours and ends shortly before midnight. Since its start in the 1950’s, it has become a tradition for many Japanese people to watch the show with family while they await the midnight hour.

After watching our favorite young J-pop singers in the early part of the show, it’s time for my sister and I to take a bath. Our mother always bought new pajama and underwear for us to wear on New Year’s Eve for the fresh start of the year.

Another tradition to follow before midnight is to eat toshikoshi soba (年越し蕎麦）which means “year crossing buckwheat noodle”.  Like osechi ryori, toshikoshi soba also has a special meaning. The most common theory is that the long shape of the noodle signifies the wish for a long life. Additional symbolism includes letting go of hardships from that year, as the noodles are easy to cut while eating. I never understood the reason why I was able to eat soba noodle with no problem after already eating dinner. I guess it was the excitement of the night and the hot soup that my mother makes for the soba noodle was exceptional with good bonito stock, dashi (出汁). Despite of all the excitement, it was always difficult to keep my eyes open, especially with my belly so full. It’s almost midnight and it’s time to go to bed, or futon. In my dark room snuggling in my futon with my eyes half closed, I hear joyano kane (除夜の鐘）from a local temple that is miles away from our house. Joyano kane is the tolling of a large bell in Buddhist temples. They strike 108 times starting usually a little before midnight. According to Buddhist beliefs, the number 108 corresponds to the number of worldly passions and desires of human beings. It is said that the 108 strikes of the bell remove these evil desires and purifies you for the upcoming year. As my consciousness is fading, going to a dreamland, the awe-inspiring bells continue ringing in the crisp, cold winter air.

A warm, appetizing smell from downstairs wakes me up on New Year’s Day. Most of the Japanese homes don’t have a central air system and we have an individual heating unit for each room. It’s turned off after you get into a futon at night so of course, it’s cold in the morning which makes it so hard to get up. But there are a few events that give me a reason to encourage myself to come out of the nice and warm futon.

One of them is Otoshidama (お年玉). It’s a little envelope containing money that adults give to children for New Year. After we greet to each other by saying “Akemashite omedetou gozaimasu“ (A Happy New Year) in a bit of a formal way, my sister and I get the envelope from our father that we were looking forward to. The older you are the more money you get. So I was always jealous of my sister who is eight years older, comparing the amount of money we get. Then it’s time to eat a special dish called ozōni (お雑煮) which is the second event of New Year’s Day. It’s a soup containing mochi rice cake and it is one of a few dishes that my father cooks for the family. I am not sure how this family tradition started, but it was always my father who cooked this special dish for the New Year as far as I can remember. Ozōni is very regional, so the flavor and the ingredients to put in are very different depending on where you are from in Japan. Some areas add miso for the soup with different veggies and meat. But our family’s version was very simple with a soy sauce based fish stock and a green leafy vegetable called mochina (餅菜).

While we are savoring our ozōni, we hear a mail carrier drop nenga-jō (年賀状) in our mail box, my third favorite event of the day. It’s a New Year card, similar to a holiday card here. But unlike holiday cards, the post office holds all the New Year cards mailed, usually between December 15th through 25th, and delivers them all on January 1st. My sister and I patiently wait while our father sorts all cards for each family member. My father receives hundreds of cards; many of them are business related. My sister and I compete for the number of cards from our friends. Our parents are talking about how big all the kids have grown, looking at pictures on the cards from family and friends who live far from us.

After we get dressed in nice, new clothes, we visit our neighbors for New Year’s greeting. There again, my sister and I get more otoshidama. It’s usually only given from your family members but these neighbor families were always very close to us like our own family. We also visit a local shrine and then go to see our grandmother who lived about 30 minutes away from us by car. She was the biggest contributor for my New Year money collecting campaign!

January First Through the Third

Whenever we eat a meal at our house during sanga nichi (三が日) from the first through the third, osechi ryori makes its way back to the table. By the last day, you don’t even want to see these dishes any more, but it’s also a part of tradition to feel that way. The TV is on with all the special New Year shows while we munch on mikan (みかん), Japanese mandarin. The clock during these three New Year days definitely moves more slowly, in my opinion. These three days are all about spending time with your family and enjoying time to relax.

Living in the US now, these memories around the New Year holiday in Japan make me feel homesick, missing my family in Japan terribly, especially after Christmas is over. But that also means that I am so blessed to have the memories that I cherish so deeply.

I love you so much, Mom, Dad, and my beloved sister. I’ll try to keep the spirit of tradition here by making special New Year dishes and embracing family time so my children can feel warm and loved as much as I did.

Try making your own toshikoshi soba with this recipe. 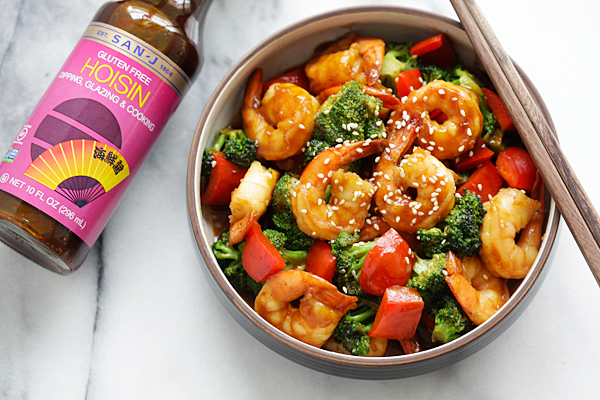 How to Use Hoisin Sauce in Any Meal